Konjac / Porang or also known as iles-iles is a tuber plant of the species Amorphophallus muelleri.

The benefits of this porang are widely used as raw materials for flour, cosmetics, water purifiers, as well as for the manufacture of glue and “jelly” which in recent years have often been exported to Japan. 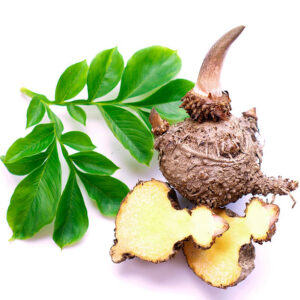 Porang tubers contain a lot of glucomannan in the form of flour. Glucomannan is a natural water-soluble fiber commonly used as a food additive as an emulsifier and thickener, it can even be used as an ingredient for making environmentally friendly glues and making aircraft components, as reported by the official website of the Ministry of Agriculture.

Porang is a shade tolerant plant up to 60%. Porang can grow on any type of soil at an altitude of 0 to 700 meters above sea level. In fact, the nature of the plant can allow it to be cultivated in forest land under the shade of stands of other plants. For seeds, it is usually used from pieces of stem tubers or tubers that already have a growing point or frog tubers (bubil) which are planted directly.

porang plant has strategic value to be developed, because it has a big enough opportunity to be exported. The Agricultural Quarantine Agency notes that the export of porang in 2018 was recorded at 254 tons, with an export value of Rp 11.31 billion to Japan, China, Vietnam, Australia and so on.

Currently, many konjac / porang tubers come from the forest and have not been widely cultivated. Currently, there are several centers for processing porang flour, such as in Pasuruan, Madiun, Wonogiri, Bandung and Maros areas.